Students took their unbalanced forces quiz. I included an experimental design problem from the 2016 AP Physics 1 exam but told students I was essentially using it as a pre-test since I haven’t had them try any of that sort of problem yet and want to see how well they are translating what they’ve done in the lab to written problems.

Students did some mistakes whiteboarding with yesterday’s problems. I was wary of how it would go in my 6th hour, since I only have eight students and they chose to work in one large group yesterday. There was a lot of great conversation yesterday, but it turns out a lot of students had written down steps without being clear on why they were taking that step, so this was a good opportunity for students to clarify those gaps. 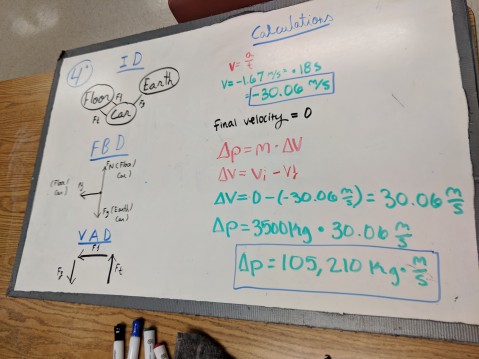 Students carried out the experiments they’d planned yesterday to see how mass changes during dissolution. Afterward, they burned steel wool on a balance to get one more example. On Monday, we’ll discuss the results. I collected all of the changes in mass in a spreadsheet to produce class histograms of the results that we’ll also discuss on Monday.