We had a board meeting on the impulse lab students have been working on. There were a few groups with really nice results, but this is a very tough one to get consistently accurate slopes, which made the discussion tough, even though my students did a nice job. It was a little tricky getting to the formula we’ll be using for impulse since the lab had a non-constant force, but the equation assumes a constant one. Next year, I might switch to the half-Atwood machine, rather than saving it for unbalanced forces. 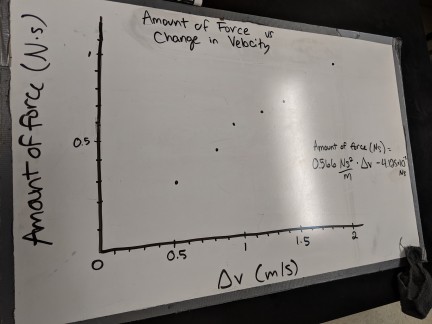 Students finished up the dueling buggies lab practical. I saw a much wider range of approaches than in my AP classes this year; most of my AP students are in the same math classes, which I think encourages them to think about problems in similar ways. My regular classes, meanwhile, have a much wider range of students, so there was a lot of great discussion about different ways to think about this problem.

I am receiving access to Pivot Interactives this year in exchange for piloting some of their chemistry activities.

Students used Pivot Interactives to make mass vs. volume graphs to identify unknown liquids by their density. A lot of students had some trouble getting started, but, once I pointed out the similarities to the density of water lab we’d done, they were very successful. The videos don’t zero the balance so that the graph will end up with an intercept; this was the first graph with a non-zero intercept they’ve seen in this class, so it was challenging, but we were able to work through it. I think just about every group picked gallium as their unknown liquid, which is fitting, since it would be the hardest to do in the classroom.