Students played the Mistakes Game with some electric circuit problems. I noticed students who drew arrows to represent the possible current paths tended to be much more successful, so in my 4th hour I explicitly made that part of the instructions. I also took a few minutes in that hour to give students a series and a parallel circuit to have students rank the resistances to solidify that idea. I think I will start with that in 2nd hour tomorrow.

Student worked on identifying sedimentary rocks using a key. There were some good discussions in lab groups about the fuzzy boundaries between some of the rock types. I struggled a bit with what thinking students could do to go beyond just using the identification key. I think I’m going to run into the same issue tomorrow with the metamorphic rock lab. 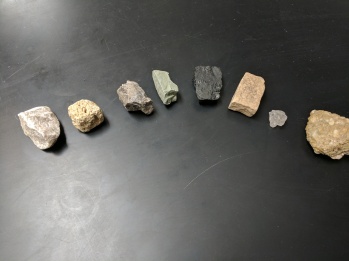