Today, students worked through an activity I got from The Physics Teacher. Groups were given a black box with three light bulbs and had to figure out how the bulbs were wired without opening the boxes. I front-loaded some thinking by having students sketch the four possible circuits and do some KVL diagrams and arrows to show currents, which students were then very successful at applying to interpret the behavior of their boxes. The main issue I ran into is many students students initially wanted to treat equivalent circuits with slightly different arrangements as different circuits. For example, groups often drew one parallel circuit with one bulb on the first branch and two on the second, then a second parallel circuit with two bulbs on the first branch and one on the second. The KVL diagrams provided a nice tool for showing why those circuits are equivalent. 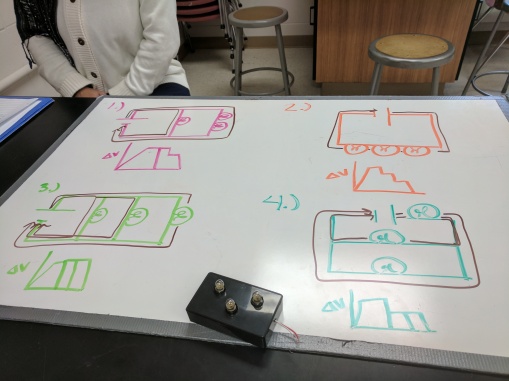 Thanks, Lotze, for drilling holes in all the boxes!

Students identified metamorphic rocks today. Similar to the igneous rock lab earlier this week, I started by having students sort the rocks based on visible properties. Most groups went with whether the rocks were layered, which lead nicely into foliation. A few groups when with sheen, which is the other major property used to identify rocks on this key. Students struggled to tell the difference between marble and quartzite using the key. After the lab, I talked a little about hardness and the acid test, but it would be nice to give students some tools they can use during the lab to differentiate those two. 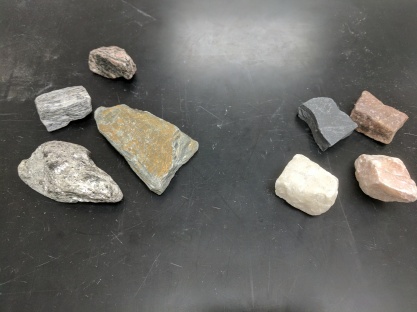