Students started working on some projectile motion calculations. We also took a few minutes to discuss a new clip from Mythbusters Jr. where an archer attempts to replicate Odysseus’ shot through a series of rings. Students head read the Odyssey in English and were excited to link what they’d read to some physics and Mythbusters and there was some good conceptual discussion about the trick.

We spent some more time whiteboarding diagrams in our efforts to figure out what interaction dissipates a bouncy ball’s energy. It was clear students were a little rusty on free-body diagrams and velocity vs. time graphs, but they were able to make sense of  what the diagrams should look like and there was some good discussion along the way.

I am a part of the Pivot Interactive’s Chemistry Fellows program.

I usually introduce phase changes with a lab using lauric acid, but have found that while students notice their temperature doesn’t change during the lab, many of the students I see in Chemistry Essentials struggle enough with reading graphs that the small errors and uncertainty in their data makes it tough to pick out the big ideas. This time around, I decided to try starting with a version of the lab in Pivot Interactives. When students weren’t responsible for stirring, the data came out much cleaner. I also found students were much more willing to accept the temperature plateau as something real than I’ve seen in the past. This lead to some great questions about where the heat must be going when the temperature isn’t changing. 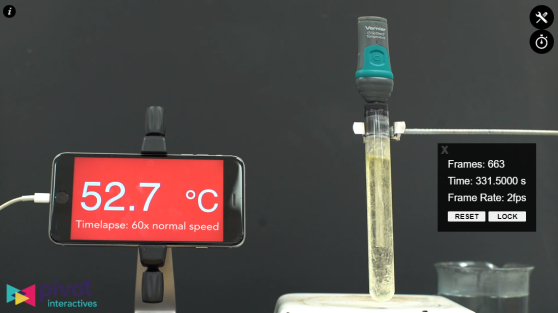