Students predicted the relative forces on two carts in various collisions, then we tested them using a pair of carts with force sensors. I really like using hoop springs for this since it gives a very clear visual in addition to the force vs. time graphs.

Students whiteboarded the problems they worked on yesterday for a gallery walk. We set up the packet to re-use the problems we had that just deal with representations. 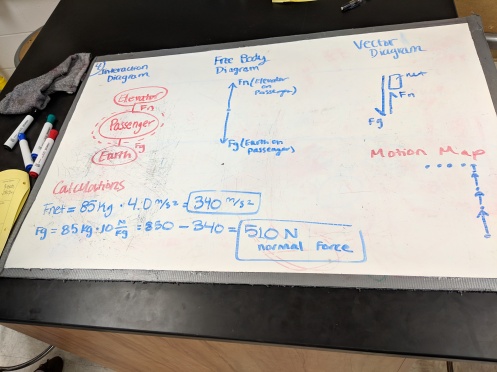 After discussing the problems, I showed students a video I’d recorded on our elevator and asked them to write a CER for whether I took the elevator up or down.

We added polyatomic ions to the formula writing we’ve been doing. Students seem to be getting the hang of how to figure out the formula. Some students have figured out the “flop and drop” strategy, and others are opting to draw the simplified Lewis dot structures we’ve been using when they get stuck.