Students continued working to determine whether a bouncy ball dissipates most of its energy from impact or from air resistance (I’ll have an article about this activity in the January issue of The Science Teacher). Today, students used LoggerPro to analyze the videos they made yesterday and collect evidence. There were a lot of great conversations about connections between energy and motion, which is exactly what I’m after with this activity. Most students had a draft of a CER about where the energy was dissipated by the time they left class.

As part of my effort to focus on lowering the social stakes in my class, I had students do some whiteboard speed dating to go over yesterday’s goal-less problems. There were a lot of great conversations; the best part was how many students I heard asking “How do you know?”. My 1st hour in particular did a great job of finding and correcting mistakes in each others’ work. I also am continuing to talk about my pedagogical choices more than usual, which seems to be helping students go along with what I’m asking and hold each other accountable for participating. Particularly in my 1st 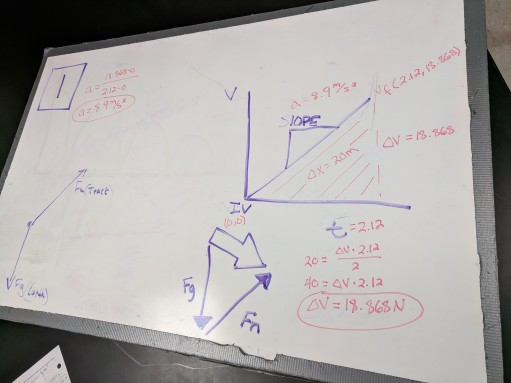 The units got fixed on the next rotation, but I forgot to snap a new photo

We discussed the results of yesterday’s lab to get to a definition of density. I skipped doing a true board meeting because, with break looming, I was worried about time, but students didn’t have as solid a mental model of density as I would have liked when they were working on the worksheet. It was a good reminder that pedagogical shortcuts have their cost.