Today, students whiteboarded the results of yesterday’s video analysis. Since my 2nd hour had quite a bit of discussion and worked through much of the sense-making while they were in the computer lab yesterday, I skipped some of the structure I’ve been using in board meetings and we got to the big ideas pretty quickly, which left time to whiteboard CERs of predictions for a demo that drops one marble straight down while launching a second horizontally. In my 2nd hour, I barely had to speak as the students spoke to each other and had some fantastic discussion that accomplished exactly what I hoped it would. In my 4th hour, my students were much more hesitant to speak up. They are a naturally quieter group and had a lot less dialogue in the computer lab, so I think they would have benefitted from some pre-discussion in their lab groups and a little more structure, like Casey Rutherford’s Observations, Claims, & Evidence which I’ve used to frame most of the board meetings this year. 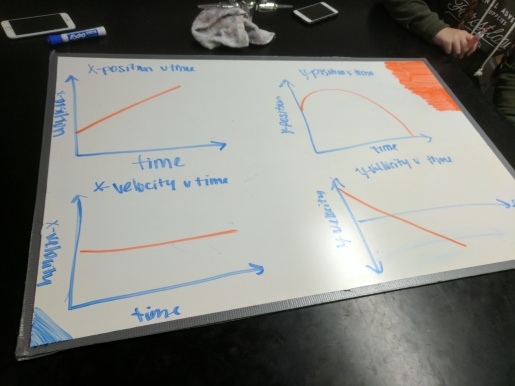 We had some discussion about what seemed to be key characteristics of the energy types in yesterday’s simulation to form a basis for some definitions. I took a page from Modeling Instruction and defined potential energy as coming from interactions, then had some discussion about what constitutes an interaction. In the past, I’ve used stored energy as the definition for potential in 9th grade, but I like that interaction energy solidifies the connection between potential energy and forces. 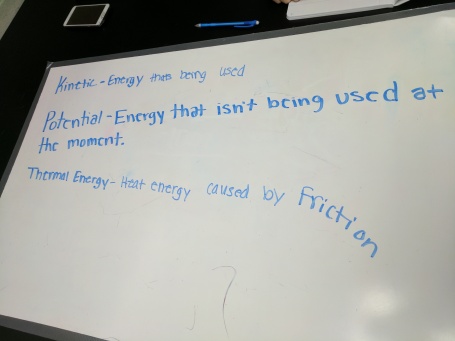