Students worked on collecting data to determine whether a bouncy ball looses more energy while its in the air or when it hits the table. There are lots of different approaches, and groups spent the majority of their time trying to figure out what might be useful to measure, which lead to some great discussions. The most elegant approach I saw was a group that did some video analysis in Logger Pro and produced a position vs. time graph. They argued that since each bounce’s parabola is symmetrical, the bouncy ball must be at the same speed for a given height on that bounce, so the energy stays the same while its in the air. Then, they compared the steepness of the parabolas for each bounce to show that the energy changes after the bouncy ball impacts the table. 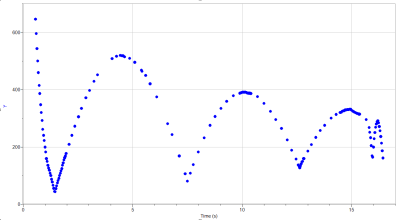 Students practiced using electronic balances and switching between mass and moles. One of their tasks was to determine how many atoms of chalk it took to write their name on a lab table. The best part of today, however, was the ways I saw my students starting to come together as a class. I saw a lot of students, including some with a reputation for typically checking out in school, having great conversations about the quiz I returned or the day’s assignment. A few students even took over the whiteboard at the front of the room and started adding to what I’d put up there as they tried to make sense  of their measurements. I’ve been having a lot of conversations with these students about what effective collaboration looks like, since many have not really experienced it, and its great to see those conversations translating into the actions of my students.