I am being compensated by Pivot Interactives for participating in a pilot of their chemistry materials.

About half of my students were gone today for a field trip, so I decided to do a lab on Pivot Interactives reviewing constant velocity and impulse since that would be an easy option for absent students to make up. Students analyzed the motion of a puck after a slap shot using CVPM, then analyzed the actual slap shot using momentum transfer.

A lot of my physics students were also on a field trip today. After a board meeting on the ramp lab, I gave students time to start a Kelly O’Shea’s kinematics card sort. I left out the blank cards and the word cards today so students only had the graphs. Initially, almost every group just put all of the same type of graphs together, so they had a position vs. time graph category, a velocity vs. time graph category, and an acceleration vs. time graph category. I think this was actually helpful to a lot of students, since it drove home that the graphs were telling them different things about the motion. Once groups showed me their initial sorting, I challenged them to come up with another sorting where they could put two or more graphs of the same type together, which lead to great conversations about what the graphs showed and lots of students working on specific language. 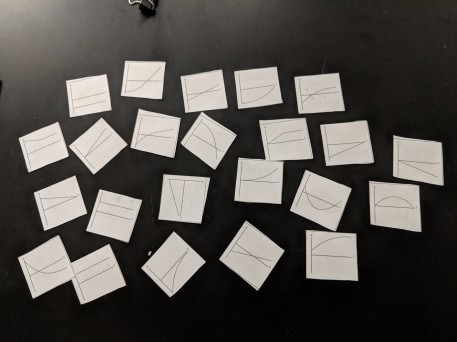 Students did a few different chemical reasons in test tubes to look for signs of chemical changes. I saw some preconceptions coming up that a chemical change should lead to a change in mass, so that is something I need to think about how to address going forward. I think part of that comes from the fact that I referenced burning steel wool as a chemical change early in this unit, when the chemical reaction that formed a precipitate from the same sequence would have been a better choice.