We discussed what students saw in yesterday’s bowling ball lab to get to a rule for how taps affect motion. Yesterday, a lot of groups started having conversations about how the size of the tap and the mass of the bowling ball plays into how much the motion changes, so I took advantage of that to introduce the definition of momentum, which lead smoothly into framing Newton’s 1st Law in terms of changes in momentum. 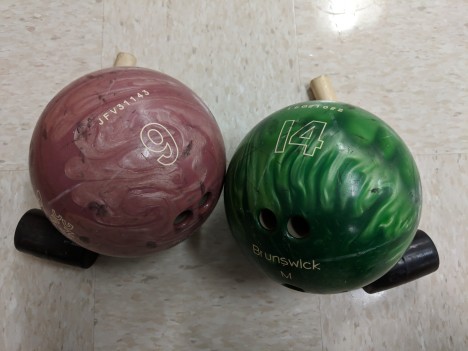 I introduced mistakes whiteboarding today with some photos from the first time I made fried mozzarella with nectarines and balsamic glaze so we could have some discussion about which photo did more for my learning. Students then whiteboarded yesterday’s problems and had some great discussion about the problems.

It was still tasty

Today, we picked up discussing yesterdays lab on density. Since we’d made a good list of observations about the graphs yesterday, today I had students whiteboard “for every” statements describing their slopes, which, along with particle diagrams, lead nicely into a definition of slope. For next time, I’d love to find a second liquid that gives a pretty nice slope so students can contrast the two.

One thought on “Day 9: Momentum, Mistakes Whiteboarding, & Board Meeting”