Students used PhET’s circuit construction kit to look for patterns in the current and potential difference in both series and parallel circuits. I usually do the PhET version before the real-world version we started yesterday, but testing season makes it tricky to reserve a computer lab right now. I overheard some students making good connections to their work yesterday and noticing the key things I wanted them to notice. 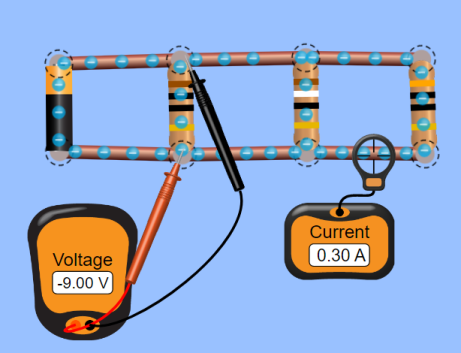 Students re-did the impulse lab from earlier this week. This time, I spent more time discussing with them why we care about the change in velocity, rather than the velocity at a specific moment. Students were more visibly attentive when I walked through how to get the change in velocity on a LabQuest than they were earlier in the week; I think it helped that they knew we were re-doing the lab because their earlier results came out poorly. I also had groups assign someone to plot their data as it was collected, which had them thinking about whether their results make sense throughout the lab. One section got beautiful results, while the other still had slopes all over the place; I’m not quite sure what happened in the second section.

Students whiteboarded yesterday’s problems using the Mistakes Game. The students who are using the electron diagrams as a thinking tool are pretty quickly getting the hang of things.