Yesterday was a snow day.

Students analyzed a video from Pivot Interactives of a pendulum, a spring, and a rotating disk in synchronized simple harmonic motion. I overheard some really good conversations about differences between the x-position vs. time and y-position vs. time graphs for the pendulum; a few students relate it back to the projectile Pivot Interactive we’d done and tried to imagine a camera that just showed the vertical motion of the pendulum.

Students started collecting data to find a relationship between the change in height of a cart on a ramp and the velocity at the bottom. On the elastic potential energy lab, a lot of students just measured the height of the cart, rather than the change in height, so I spent some extra time on the pre-lab discussion to make sure students saw why the change is important. 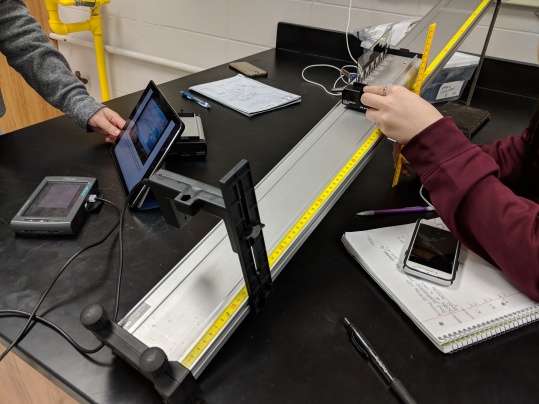 We took another shot at finding the freezing point of lauric acid since the weather on Monday cut us short. A few students who’d collected some data were frustrated that they had to start fresh, rather than picking up where they left off. It will probably be worth spending some time tomorrow on why they had to start fresh, especially since it connects to what the graph physically means.