Students worked on a balanced forces lab practical to determine an unknown mass given the tensions supporting it. I just made one set-up, and it was interesting to see that in one class, each group wanted to take their own measurements, while the other class wanted to just have one person take the measurements and record them on the whiteboard. The hour that took measurements as a whole class actually took longer to get everyone the data, but had a lot more conversation about what they needed. 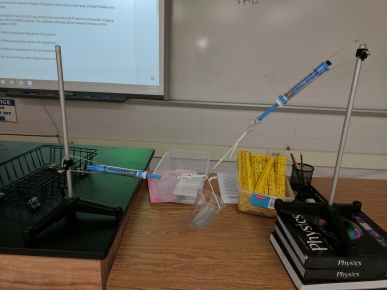 I’ve got enough students struggling with constant velocity that we took a day to do a Modeling worksheet that I usually skip. Talking to students, there were several groups who thought the area of the velocity vs. time graph only gave displacement in special cases. I’m also seeing a lot of evidence that students are losing track of the physical meaning of the graphs and their connections with the math. For example, when writing an expression based on a graph, a lot of students are using units and variables from the dowel lab, which tells me they know a procedure to turn y=mx+b into “physics”, but don’t have a conceptual understanding of what they are doing. These challenges have been a recurring theme in physics this year; we’re starting constant acceleration tomorrow, and I think I want to revamp the lab a bit to try and prevent some of these issues.

Students melted ice into steam and made observations and drew particle diagrams along the way. This led nicely into the idea that as the temperature increases, the particles are moving more. Students also made some nice connections to yesterdays’ demo with food coloring in water.