We had a board meeting on yesterday’s force of gravity lab, and the discussion was better than I expected at this point in the year. As we were talking about the slope, one student claimed “Gravity doesn’t change”, which lead nicely into what we mean by that and how we know. In response, another student shared that yesterday one of her group members said “The force goes up 10 N for every 1 kg of mass”; after finally reading Arons this summer, one of my goals is to have students make “for every” statements about slope, and I was thrilled it came up naturally.

I also introduced uncertainty during the board meeting. Students had a lot of great observations about the relative precision of measurements and how much mass it took to change the reading on the scale, which gave them a sound conceptual basis. I rushed the discussion since the end of the hour was coming, and it ended up more teacher-directed than I’d like, but I’m pleased with how the basic approach worked. 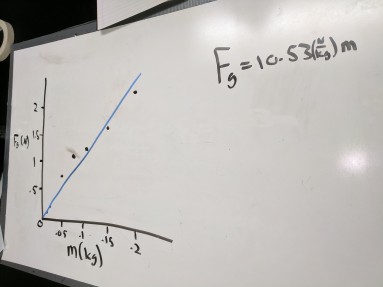 Students collected data for the buggy lab. Since when I ask for observations, there is usually a student who says the buggy is moving at a constant speed, I took a page from Michael Lerner and framed the lab as seeing how we can find out. A few groups are starting to make “for every” statements about their slope, which I did not see during the introductory unit and is great to see. I think the relationship is more obvious here than it was in the intro labs. 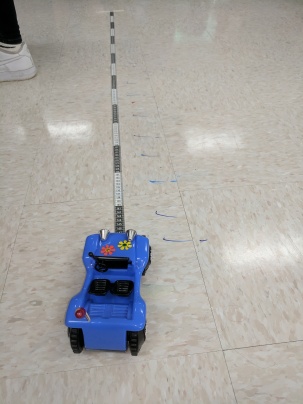 I’ve been struggling with classroom management. This is a very high-energy group, and there are a lot of things that are a lot of fun, but I’ve been having trouble keeping them on task and getting them to voices besides their own. I decided to pause today to spend some time developing norms as a class. I think a lot of students felt it was punitive, but many also agree that things aren’t working at the moment.