Students collected data to plot the force of gravity on an object vs. its mass. I had different groups use spring scales with two different ranges. Tomorrow, I’ll use the different levels of precision to motivate a discussion of uncertainty. Groups with the 50 N spring scale have already noticed that the smallest hanging masses don’t noticeably change the scale’s reading, which is exactly the kind of observation I was hoping for. 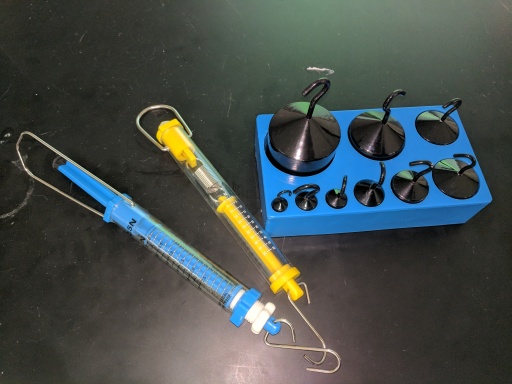 Students revisited the dowel lab, this time as a group assessment. Their results on the original lab weren’t as good as I was hoping, but they are looking much better now that students have had an opportunity to discuss the flaws in their original approach.

Students found the volume of several different shapes, then measured how much water was needed to fill each one. Some groups got beautiful results, but other groups struggled. I think the groups that struggled had trouble matching up their measurements to the formulas on the cheat sheet I gave them or the Google calculators I showed them. A lot of students also also had trouble measuring the amount of water they put into the shape. The groups that struggled with these measurements were also the groups that were the least focused, but I’m not quite sure which issue is the chicken and which is the egg.