On Friday, as students finished the FCI, they picked up some problems translating between momentum vs. time graphs, motion maps, and written descriptions. Today, we went over them using the Mistakes Game.  Students pretty readily embraced this approach, which was great to see. I did notice a lot of students were not clear on whether arrows between the dots on a motion map represent the momentum vector or a “tap”, which I think goes back to how I introduced the bowling ball lab. Asking students about the spacing on the motion map got them to think about whether there should be a tap, which seemed to help. 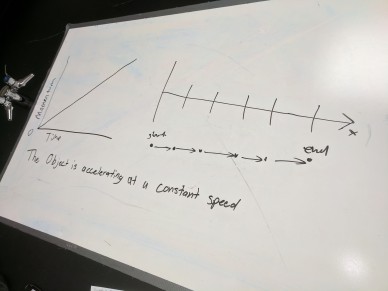 Students worked on finding a relationship between the length and period of a pendulum. On Friday, we’d measured a single period as a class to motivate the need to measure multiple periods. Today, I verbally reminded students of that discussion, but, once in the lab, a lot of students were unclear about what it meant to measure multiple periods; I think it would have been useful to demo that to help with their language. Most groups were able to get a graph done, and have done a linear fit with a nice big intercept, which will lead nicely into motivating the need for other relationships tomorrow.

We continued the mass and change sequence from the Modeling Instruction chemistry curriculum. My plan was to get through both sugar and Alka Seltzer dissolving in water, but I wasn’t thinking when I grabbed beakers this morning and ended up with way more mass than the balances could handle. I ended up having my students do a lot of math, which many found overwhelming, especially since they had to add some blanks to the handout I’d made. If I’d been thinking, I would have pulled out some lightweight plastic cups to replace the beakers. Tomorrow, I’ll use those for the Alka Seltzer lab.