This concept development sequence comes from conversations with Michael Lerner, Kelly O’Shea, and the rest of the Physics! PLC!

We had a board meeting for the dowel lab, following Casey Rutherford’s Observations, Claims, Evidence structure. Even though all of the dowels were made of the same material, slopes were all over the place, so we had some discussion about how to improve the results next time. A lot of groups just wrote down their calculated volume, rather than the values they measured, which made it difficult to check their calculations, so we discussed the value in recording the measured values.

We continued the mass and change experiments, which today included burning steel wool. I needed to do a better job of framing this lab as being about the mass of the steel wool. A lot of groups missed recording the initial mass before they lit the wool, which I could have addressed by checking they had that value before giving them any matches. I also saw a lot of groups blowing on their wool or tossing used matches onto the dish with their wool, which reinforces that they were not thinking about the mass as important here. 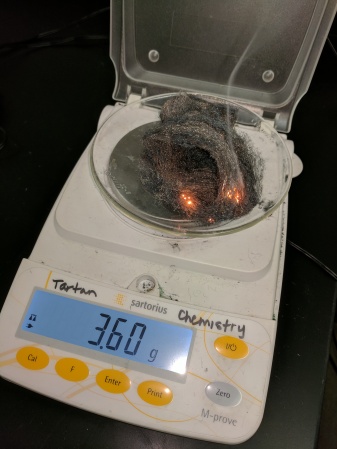