Today was the last true work day on the final project. One student is analyzing a specific throw frisbee golf had come up with attaching an LED to a point on the edge of his disk to make it easier to find the angular velocity after a throw since a sticker wasn’t quite visible enough in the video.

A lot of students are getting excited for presentations next week. Several students are really proud of what they’ve done so far and are looking forward to sharing it with their peers. One student was really disappointed when he realized he’s going to miss one day of presentations; I suspect he’ll insist the students he misses tell him about their projects some other time.

When I collected notebooks yesterday, one of the items I looked at was a reflection that included a question about what students need from me to end the term the way they would like. Several students wrote they aren’t always sure what the big idea behind a lab is or how it connects to other labs, which isn’t surprising since I feel like I’ve been struggling with that in earth science. This is a good reminder of how important it is to have a coherent, purposeful curriculum.

Today, we shifted from looking at the relative ages of rocks to finding the absolute age with radioactive dating. Students did a lab flipping “coins” to model radioactive decay. I also collected a class average and spent a lot of the post-lab discussion looking at how results from individual groups compared to the class average. I also expanded the time we spent on connecting the lab to actual radioactive decay in response to the student comments. 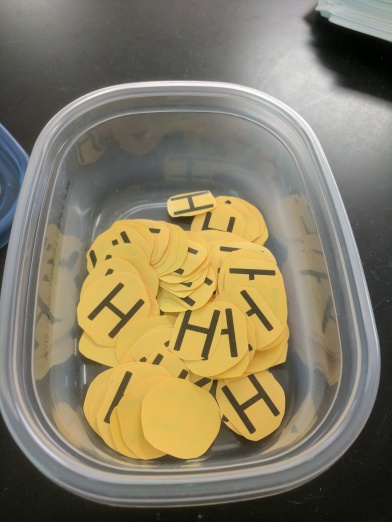