Students used PhET’s circuit construction kit to explore the differences between series and parallel circuits. When I’ve used batteries and bulbs, students really struggle to see (let alone articulate) what’s going on with the current, so the visible “electrons” in the simulation were a huge help in getting students to understand why certain changes happened.

We discussed as a class the results of the Newton’s 2nd Law lab. I need to have students practice talking about the slope more; they were able to get to “The force needed to accelerate 1 m/s2“, but it took some pushing on my part; I think the issue is just lack of practice. I was pleased by the discussion; students are doing more articulating of the big ideas. I was really excited by the discussion students had about the intercept. I’d planned to declare the intercept zero and move on, but in both sections students seemed interested in talking about it. They decided it would be reasonable to have a non-zero intercept on this experiment and it would be equal to the amount of friction you have to overcome to start the cart moving. 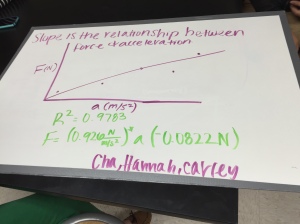