Students worked on a model of part of the EM spectrum, cutting paper to scale to represent the wavelength of some different types of waves. I started this activity when I included more calculations in the course, so it was partly a chance to practice working with scientific notation and switching between wavelength and frequency, but I’ve been taking out a lot of the calculation in the course and the only conceptual ideas this activity gets at is comparing the wavelengths. The standard this activity goes with is about identifying parts of the EM spectrum, so I need to spend some time looking for other activities that can meet the standard better. 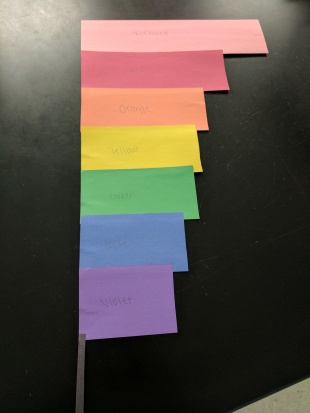 I introduced impulse today by rolling a cart into a force sensor with a bumper to look at the momentum vs. time and force vs. time graphs. I did this as a demo since we only have one bumper. In my 2nd hour, we got pretty nice data and students easily saw that the area of the force vs. time graph equaled the change in momentum, but my 4th hour got pretty ugly data and I’m not sure why. Afterwards, I borrowed from Michael Lerner again and had students work on solving some impulse problems using SOS diagrams.

Students wrapped up the lab on color. Using some colored paddle filters, they observed white light bulbs, colored light bulbs, white paper, and colored felt. Next time, I might have them look at the felt under the colored light bulbs, as well, to strengthen their ideas about colored objects under different light sources. After the lab, we confirmed some observations using a diffraction grating on an overhead projector to get colored light. Finally, we revisited the video I’d shown them before the lab to refine and expand their initial explanations. In what is probably old news to people familiar with the role of phenomena in NGSS, the concrete goal of explaining an unexpected observation seemed to help students participate more, as well as give them a firmer grasp on what it looks like to understand the learning target. I’m wondering if using phenomena to frame more labs could help students coming to me from another teacher adapt to my classroom.

My classes were pretty thin today since the senior social studies classes were watching the inauguration. I gave students who were here the opportunity to do some in-class retakes. I also picked out a couple of fun puzzles from Mad About Physics that students could work on. Students got pretty into the puzzles, especially one where they can get a marble to roll “upwards” by adjusting the space between some straws in a v.

Yesterday, a lot of my students were talking about standing waves and longitudinal waves as two separate things, so I started by hooking a spring up to a wave generator to produce some standing waves and show the familiar patterns. Afterwards, I showed them a short video of some demos with a pair of 3D glasses, using it to prompt some questions to motivate a lab on color. 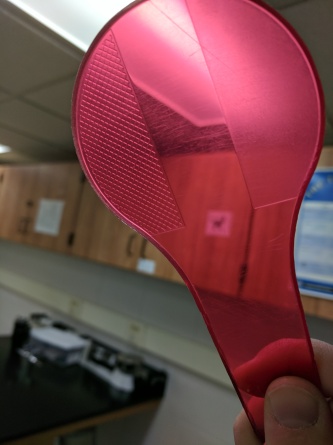 We had a board meeting to discuss yesterday’s lab with second class levers. On the lab, I simply asked whether the model we’d developed so far for a balanced lever also worked for this new type. Since the question is a bit ambiguous, groups that got similar results disagreed on whether the answer should be yes or no, which lead to some great discussion on what are the key elements of the model. I was also pleased with the way students talked about uncertainty to decide whether or not they could ignore the intercept. Over all, I’m really excited about how discussions with this group are going. I feel like I’m getting to take more of a backseat and listen to students talk to each other, rather than relying on me to guide the conversation.

Students graphed the diameter of a light beam vs. the distance from a light source, making some qualitative observations about brightness along the way. We used the results as the basis of a discussion about why an astronomer would want a big telescope to observe very distant objects. I also did some having students observe the pen light itself from different distances to get across the idea that, even though the light beam spreads out, the light source doesn’t look any bigger.

Students put colored beads under different colored light bulbs and tried to pick out the red, green, and blue beads. In addition to coming up with a measure for how easy it was to sort the beads, they kept track of which beads they tended to mistake for which color. 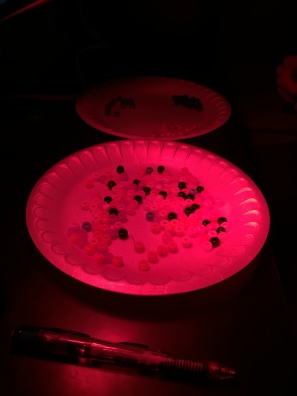 We spent some time discussing yesterday’s percent yield lab. Previously, we’ve only done problems where the mole ratio is a whole number, so I was a little worried doing a lab with a fractional ratio, but that worry was misplaced. I need to stay out of the trap of underestimating my students. There was also some good discussion about why the percent yield was not 100%.

Students used colored filters, felt, and light sources to find patterns in what determines what color they see. By the end of the hour, students were able to use what they saw in the lab to accurately explain their observations in the filters puzzle video.

For the first half of the period today, my students presented their research projects on different energy sources. Once that was finished, we started on color. I started by having students watch a short video that I blatantly copied from Frank Noschese that shows red ink and red light through both red and blue filters. I like the video because I can show all my students at once and I like having my own version so students can look at the clock and paper I used in the video to verify I wasn’t using some kind of trickery. I asked students to record their observations from the video, then try to come up with a hypothesis to explain their observations. This lead nicely into a lab where students look at things through filter paddles. Once students finish the lab, we’ll revisit the video to see how their explanation has changed.

I took a problem from Casey Rutherford’s projectile motion packet about a block given a push up a ramp with friction, then allowed to fly off the end of the ramp to become a projectile. One of the things I love about this problem is it requires to students to use just about everything from the trimester. 2nd hour, students did whiteboard speed dating, but I put a couple of goal-less problems first so students didn’t have much time to work on it, but were intrigued enough by the problem that they asked to continue next week. 4th hour, I decided to start with that problem. I had students work in groups using the roles from the University of Minnesota’s Cooperative Group Problem Solving protocol. It took most of the hour, but students were consistently successful and even my top students were challenged. It was great to see the obvious pride when students finally got the correct answer.

Students made a scale model of infrared through ultraviolet light where the length of the paper represented the wavelength of each type of light. I also had students do the calculations for how long a strip of paper would be needed to represent some other EM waves, including radio waves and gamma rays, just to give them a sense of the range the EM spectrum covers. 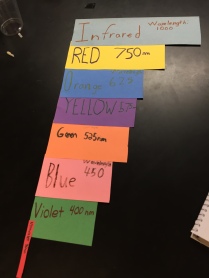 One group decided to turn their model into a Stroop test

Students whiteboarded yesterday’s projectile problems. I’m really pleased by the way my students are not only solving the problems successfully, but gaining confidence on some challenging material. 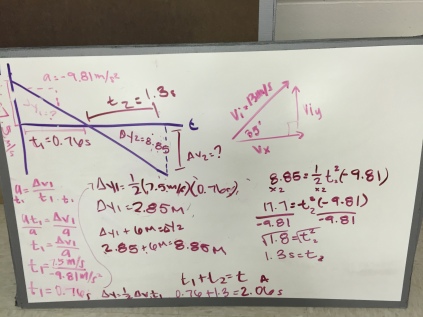 After a short quiz on sound and some discussion over final exams, I did some notes to define the term “electromagnetic spectrum”, reviewed scientific notation, and gave students the speed of light. The class was really fascinated by the speed of light and were eager to spend some time throwing out questions about the implications of light having a speed like “Does that mean some of the stars we see are already dead?” I gave the class some room to discuss what they thought about these questions, which prompted even more questions, which was great! The discussion went long enough that the students didn’t get to the lab, but I was okay with it since students were doing a lot of great thinking.

Students worked on calculations for projectiles launched at angles.I’m still having students use velocity vs. time graphs, rather than the standard equations, and students did really well with some challenging problems today. Tomorrow, we’ll whiteboard the problems. 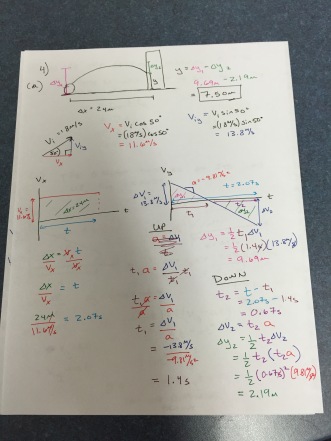