Students finished the lab practical we started on Thursday where they used a modified Atwood’s machine to find an unknown mass. Today, once they had an answer, we checked their result using a spring scale. One of my goals this year is to work on hearing from every student, so I tried posting three questions about the lab (one for each group member). Then, before groups could check their result, I would roll dice to decide which group member had to answer each question. Since there are three students in each group, I was able to hear from every student. Groups did a really nice job of making sure all three group members could answer all three questions, which is exactly what I hoped would happen. 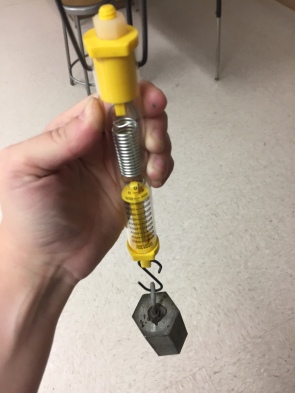 Students finished up yesterday’s lab contrasting Mars’ orbit with Halley’s Comet’s orbit. A lot of groups were surprised when they realized that the patterns from Kepler’s Laws worked equally well for both orbits, especially when they used mass as a proxy to compare the areas of two sections that represent equal times. Next time, I might see if I can get my hands on some card stock or other heavier paper to make it a little more convincing that the small differences are negligible. I also will probably re-work my Kepler’s Law introduction to include Halley’s Comet right off the bat, rather than waiting until we introduce comets.