Students tested the second iteration of their designs. This time around, groups had to plan three of their own tests, rather than doing the ramp test I’d devised for the first round. During the testing, each group also had to serve as an evaluator for another group’s tests. They were tasked with providing feedback on the validity of the tests and making their own assessment of whether the design passed each test. 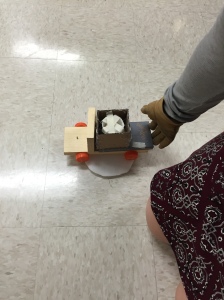 Using dry ice to simulate skidding on a slippery road 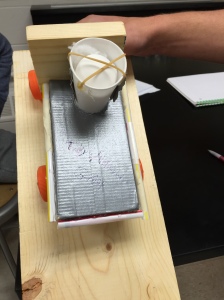 This week is about looking at some specific forces, and we started with friction. Students brainstormed what variables might affect how large the force of friction is, then came up with simple experiments to test a few of those variables. Groups measured the force of friction by pulling blocks along with spring scales, which opened the door for some good discussion on uncertainty. Every group did several trials for a given condition, then took an average. Several groups initially said that certain variables, such as surface area, had an impact because their average force was different for each condition. I got one of these groups to share their surface area data with the rest of the class for a closer look. While we haven’t covered uncertainty in this course, students were able to see that the range of forces measured for a given surface area was greater than the difference between the two averages. This lead students to conclude that the difference was probably not meaningful. Its a shift for students to think about the physical meaning of the numbers they are working with, whether in the lab or in a problem set, and I was pleased to see some evidence of that shift in the discussion of this data.