We did some debrief on last week’s testing of the engineering design challenge. Students agreed that the single ramp test was pretty limited, so, after getting new groups, students began planning new tests that would simulate a wider variety of real-world situations. The main constraints are that the tests must be reasonable to conduct in the classroom and they will need to provide evidence on the effectiveness of the design.

We began building the balanced force model today. Students hit bowling balls with rubber mallets in a lab based on Frank Noschese’s 180 blog. Some groups were debating whether the bowling ball rolled at a constant speed when it wasn’t being tapped, so we fired up Motion Shot to check. 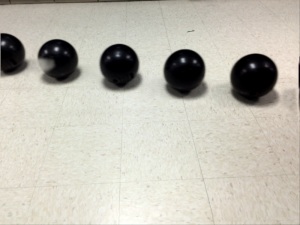 Students looked for a pattern in their motion maps and put a statement of that pattern onto whiteboards. The statements most groups started with had some exceptions or ambiguities, but by discussing these, we were able to generate a single statement the whole class could agree on. 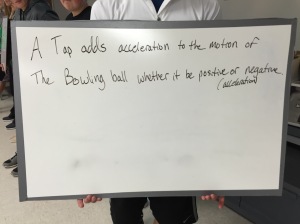 One group’s statement of the pattern