I am a part of the Pivot Interactive’s Chemistry Fellows program.

As students finished their torque quiz, I had them use Pivot Interactives to look at the motion of a spinning disk and come up with two different answers to which dot on a spinning disk is moving the fastest. Tomorrow, we’ll use those two answers to get into angular velocity vs. tangential velocity. 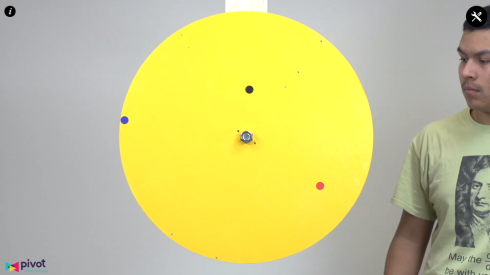 We spent some time whiteboarding yesterday’s problems. Students resisted drawing the diagrams for standing waves, but, once they got the diagrams, they were able to solve the problems.

Students used Pivot Interactives to compare their prediction for how much hydrogen gas should be produced in a reaction to how much was actually produced. I ran into an issue where a few students were very insistent that a prediction is a guess, so their calculation could not be a prediction. I didn’t have a great response in the moment aside from in science, a prediction should have something to back it up, which can be a calculation.

Another hurdle I ran into today is I have one section where a lot of students really resist talking to their group members, and the computers made it easier for them to work in isolation. As a result, I realized partway through the hour I was frequently answering the same questions multiple times with a given group and I was helping individual students with portions of the activity their partners knew how to do. I need think about how I can help my students have more productive collaboration within their group. 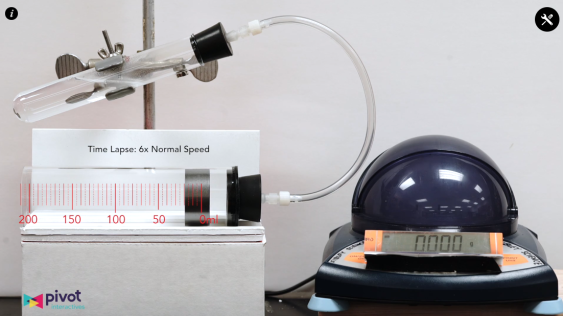 We did some whiteboarding of last week’s torque problems. Students aren’t confident, but they are getting the hang of extended free-body diagrams and successfully solving problems. With the clock ticking, that will have to be good enough for balanced torques. 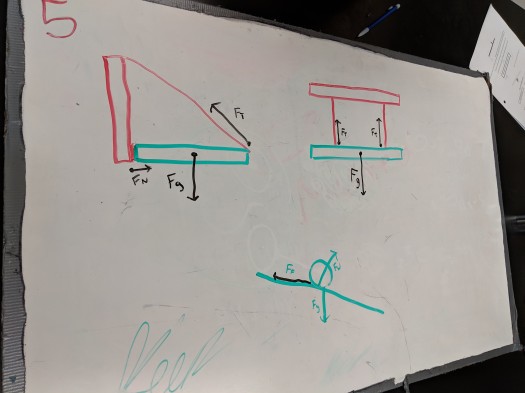 Students did some problems with standing waves. It was tricky for a lot of them to connect the wavelength to the length of the resonator, so that will be something to work on during whiteboarding tomorrow.

Students did a lab with magnesium and hydrochloric acid. We stuck with purely qualitative observations today and will get into the actual stoich tomorrow.

I was much more teacher-directed today than I typically shoot for. I ended up walking students through how to approach balanced torque problems; students were pretty into the idea that they can pick a pivot point for the problem that lets them solve for different quantities. We had a few minutes at the end for some whiteboarding. While students aren’t confident yet, I think they are doing just fine on balanced torques.

We went through a guided discussion to get at the patterns for standing waves using first a wave generator with a string, then a singing rod, and ending with a tuning fork. When there were some good points for small group discussion, I had students work in their packets, but I think it would have been better to have them use whiteboards.

Students worked some stoichiometry problems. We stuck to whole number ratios so students could draw particle diagrams as a tool to work through the problems.

I was on a field trip today, so had a sub.

Students worked some problems with balanced torques. I wish I’d edited the worksheet to include some problems revisiting forces, but ran out of time last week. I’ll be interested to see if and how my students used the area model I showed them yesterday.

Students did a lab playing with tuning forks to start building some ideas about sound waves. There’s usually some good discussion that I’m a little sorry I missed.

Students started doing stoichiometry by using nuts, bolts, and washers to represent different types of atoms, making it possible for them to “see” how many moles they have and measure the masses very directly.

We had our board meeting to get to the definition of torque. As expected, in the class where I had students plot the ratio of the forces on one axis and the ratio of the radii on the other, results were rough and I had to step in. In my other section, results came out beautifully and students were quick to figure out why their graphs had intercepts. I also introduced students to Brian Frank’s area models for torque, which students seemed to grasp.

We used slinkys to start figuring out some ideas about longitudinal waves. Students were pretty successful at noticing the things I wanted them to notice. As with transverse waves, we tied some ribbons on the spring to help track the particle motion.

I got out samples of several different materials, and had students weigh a sample and figure out how many moles they had. Not the most dramatic lab, but it was some good practice.

Students took their central net force quiz. Most seemed to feel pretty good about it, even though we moved through the content quickly.

Students did a gallery walk of some problems dealing with central net force and universal gravitation. There was a lot of good discussion as students worked on their problem, but I’m not sure how much students looked at the other problems.

We had a board meeting for the snakey spring lab looking for a relationship between wavelength and frequency. 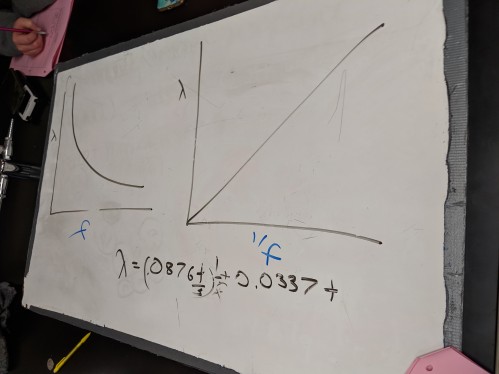 This group used floor tiles as their distance measurement

Students worked some problems translating between molar mass and moles of a substance, then did some mistakes whiteboarding to go over the problems. 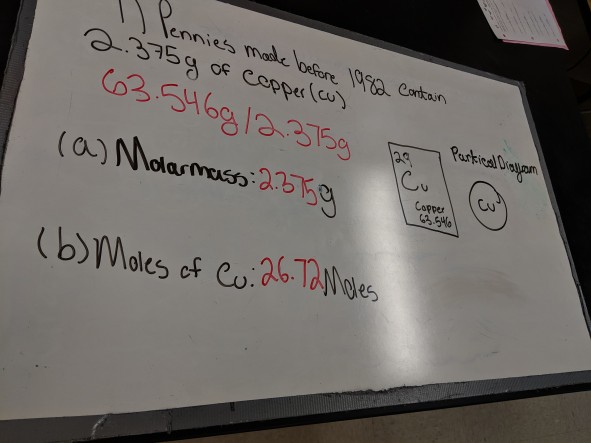 With the AP exam tomorrow, I asked students which of several options they thought would be most useful and both classes requested we use Plickers to review multiple choice. Most students weren’t at their most focused today, but there were still some good discussions. 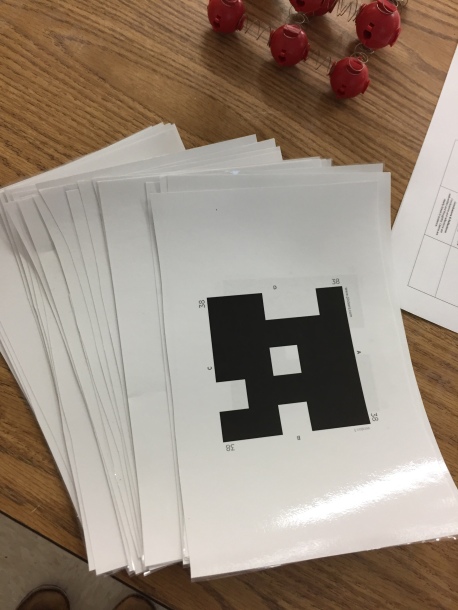 Students worked on the classic speed of sound lab. Since several labs lately have been pretty rough, I structured the pre-lab discussion more like the way I do in September to get back to basics of experimental design and made sure sketches of the set-up made it onto the main whiteboard. I also took advantage of the fact that students have made other wavelength vs. frequency graphs to emphasize that students should graph as they go to see if their results make sense. My 1st hour got a lot farther than my 5th, but their slopes are coming out very nicely.

The limiting reactant quiz last week did not go as well as I hoped, so we spent some time today whiteboarding a problem, emphasizing the role of particle diagrams. The students who were engaged seemed to get a lot out of the whiteboarding.

Students put the finishing touches on their whiteboards from yesterday, then presented to the class for the mistakes game.  I gave students copies of the scoring guides to use during the discussion today. They were quieter than usual during board meetings, mostly because the whiteboard for a full free-response problem felt a little overwhelming.

Students whiteboarded yesterday’s problems. A lot of students were having trouble visualizing the standing waves, but sketching multiple wavelengths and marking the notes and anti-nodes seemed to help a lot of students.

Students took their limiting reactants quiz. I picked a problem where the numbers work out pretty nicely, and, glancing over the quizzes, it looks like the students who sketched particle diagrams nailed the problem.

We spent about 15 minutes using Plickers to discuss some multiple choice from the practice test students took last week, then started working on the 2016 free response. Students started prepping whiteboards that we’ll use for the mistakes game tomorrow. Most groups got to the point where they felt they had a good solution on their whiteboard, so will need a few minutes tomorrow to add a mistake.

We got out the singing rod to reason out what must be the pattern for standing waves on a resonator free to vibrate at both ends, then students started working on some problems. A lot of students struggled to relate wavelength to the length of the resonator, in part because many of them were looking for a specific equation rather than using the diagrams the worksheet asked for as a reasoning tool. I need to think about how I can help students see the value of their diagrams tomorrow. 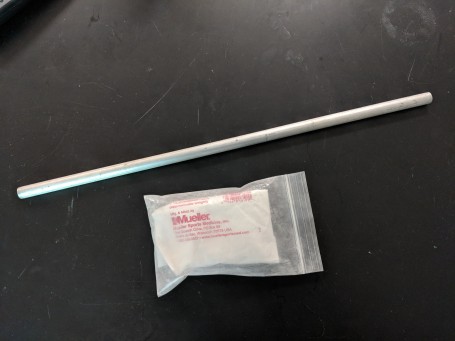 The copper from yesterday’s lab needed some time to dry, so today students got the mass and worked on their calculations. A lot of groups had balled up their aluminum foil yesterday, which lead to some big chunks of unreacted foil, even for groups where it should have been the limiting reactant. This ended up being a great opportunity for students to use a particle model for chemical reactions to think through why that happened.